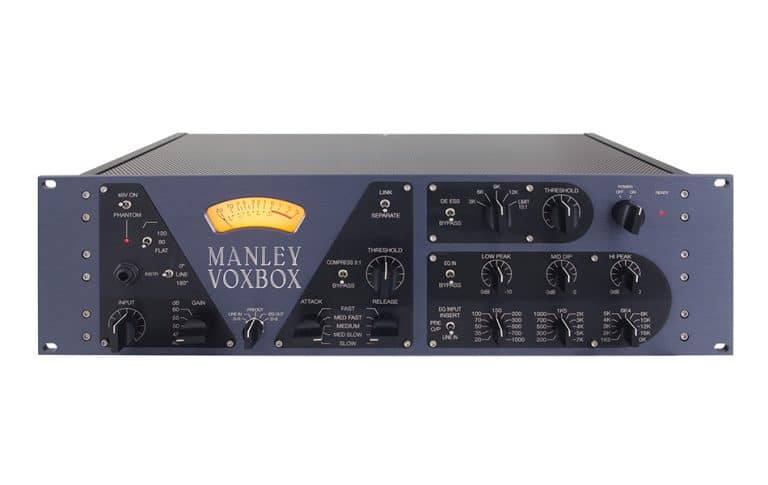 The sound processing has definitely taken a long way since the dawn of modern music.

Just imagine – back in the old days, the 1950s and the 1960s, there were almost no effects units. The distortion was achieved by wrecking guitar amps and using faulty gear, and the effects like delay and chorus were so complicated that they involved somewhat unreliable and pretty bulky tape-based devices that had their limitations.

The development of transistors made things a lot easier and simpler, making these effects units way more compact. But things definitely took a different turn with digital signal processing, a technology that’s crucial to modern music-making, both for instruments and vocals.

But with so many digital processors these days, it’s not exactly easy to find the fully professional one that will be up to standards with some of the state-of-the-art studios today.

On the other hand, even with this technology so widespread, many are still relying on the good old analog devices that give a different and unique twist to the tone in the sea of sterile-sounding digital devices.

The one in question we’re dealing with here is the Voxbox by Manley, mainly intended for vocal processing, but it also found a use for any other audio sources.

Interestingly enough, this powerful piece came out way back in the late 1990s and is still in production, almost unchanged, even to this day. So there must be a good reason why this is the case, right? Well, let’s look into it then.

First off, the Voxbox is a channel strip, which is basically a device that you can find integrated into mixing consoles, with the input, volume slider, EQ, phantom power, and a few additional parameter controls.

In some cases, like with the Voxbox, the channel strip can be external and provide processing before the signal even gets into the mixer or an audio interface. But the thing about it is that it provides analog processing with very detailed parameter controls, along with its integrated microphone preamp.

There’s also the input attenuator that modifies the signal for microphones or instruments before going into the tube stage. The gain control is a bit more complex than on other devices since it also adds a bit of coloration to the tone.

Then there’s the compressor section with very detailed controls, giving you the option to control both the attack and release parameters with five different settings for each.

The ratio is set to 3:1. Of course, the compressor section can be completely bypassed and it comes before the tubes in the signal path, avoiding any mic-pre clipping.

The path further goes through vacuum tubes, in this case, 12AX7 and 6414 Valve. The circuit has two outputs, one balanced and the other that’s unbalanced, for more versatility, depending on your studio setup.

Two additional outputs are located after the preamp, with the signal going through the de-esser, EQ, and a line amplifier with 6414 and 5751 tubes.

Then we have the de-esser and limiter section, that’s more than useful for vocal processing, and in some cases even miked-up acoustic instruments.

The parameter control in this part of the Voxbox also gives an option for 10:1 compression, which is basically a limiter at this point. This is the Manley’s renowned Elop de-esser and limiter.

In the end, we have a very thorough 3-band equalizer with plenty of controls to shape the tone you want to. What’s interesting is that you can switch and do EQ processing before or after the de-esser and a limiter.

There’s also the EQ Input switch that can patch the line input, preamp out, or the insert return. This way, you have a double-duty bypass switch for the preamp section or external processors and other different paths.

The Voxbox is also equipped with an illuminated Sifam VU meter, and a few other features like the magnetic field containment, warm-up muting circuitry, silent switching, as well as the so-called “smart-grounding.” 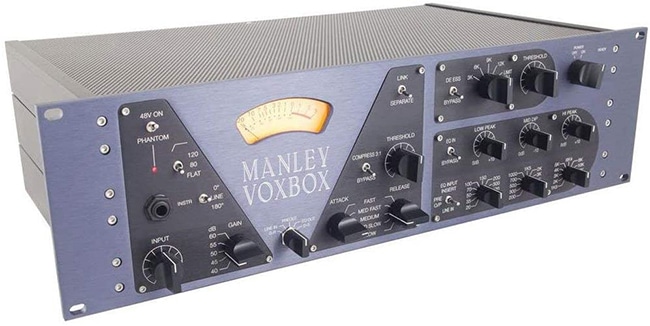 Overall, it’s pretty clear that this is a very compelling and roughly built rack-mounted piece for professional studio recording.

The biggest advantage of such a piece is that you get a completely analog and tube-driven twist in a modern studio.

It is intended for anyone who wants to incorporate that eargasmic vacuum tube saturation to their tone, even slight distortion in some cases.

The abundance of input and different configuration possibilities open up new horizons, making the Voxbox a very flexible processing unit for any kind of a music studio these days.

But the thing you need to bear in mind is that this is a fully professional piece, not something that you would be able to fully implement in a home-based studio setting.

With all the wonderful features and performance traits we explained here, you can clearly see what this device is capable of. And, needless to say, this can be seen with its price as well.

With this said, the Voxbox is a very powerful processing piece that does wonders to not only vocals, acoustic instruments, miked amplifiers, and electric instruments.

It found use in all the different musical styles due to its qualities.

Now, if you’re planning to slowly start building a professional studio, this is one of the rack-mounted units you’ll want to get into.

However, if you’re still on the home studio level and are mostly relying on your simple multi-channel audio interface, there’s no need to spend over $4000 on such a piece.