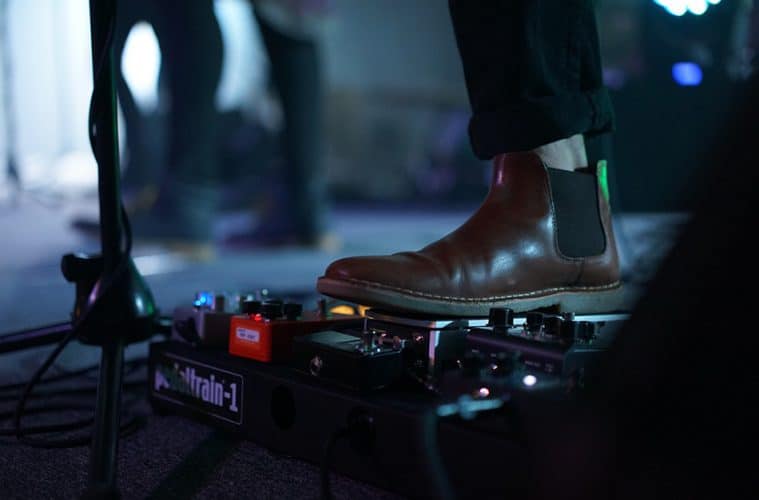 When you set out on to become a guitar player, there are so many different things that one should learn. And it all goes way past just the techniques and music theory.

The problem with this seemingly simple instrument is that it comes with an additional set of features and challenges, including a variety of different effects and other devices that can either enhance the tone or just help you perform music in different ways.

There’s even some science involved in making a perfect rig.

Be that as it may, delay pedals remain as one of the essential components for electric (or even acoustic) guitar players.

Without them, your tone might just be too “dry” and uninteresting. Sure, some may resort to using reverb pedals, but the delay or echo effect has its own charm and makes the tone more appealing in most of the contexts of modern music.

But this comes with its own set of advantages – what are the best delay pedals that you can find these days?

Well, the problem is that we have an over saturated market and so many different brands and models to choose from that it gets difficult to filter out the good stuff.

This is why we decided to do our own research and a rundown of the best delay pedals that you can find on the market these days.

Of course, with a list of any kind of pedals, you just can’t avoid adding Boss somewhere in there.

For this purpose, we’re opening things up with their DD-8, which is a continuation of their long-running series of digital delay pedals that started way back in the 1980s.

While retaining the same classic design and features of the older models, DD-8 manages to push this effect to a whole new level and bring some diversity in there.

Aside from mind-blowing 10 seconds of maximum delay time, it also comes with 11 different delay modes.

Additionally, it also features a separate plug that allows you to pair it with a tap switch or an expression pedal.

But in case you’re more into vintage stuff, simplicity, and old school kind of tones, then you can look into MXR and their amazing M169, also known as Carbon Copy.

The beauty of analog delays lies in the so-called “bucked brigade devices” that are essentially a line of capacitors that store and transfer the signal.

While it can’t have more than 600 milliseconds of delay time, the repeated tones sound just a little muffled. And this is exactly the appealing thing about analog delays, including MXR’s M169.

There are just three simple controls and an additional switch that adds some modulation in the mix.

TC Electronic has always been pretty good at keeping things simple and very functional and versatile at the same time. This is exactly what we can see with their Flashback 2 delay.

Aside from three basic controls for volume level, feedback (number of repeats) and delay time, it comes with 8 different delay modes, as well as 3 additional slots for the company’s famous TonePrint feature.

These are specially designed presets that were made in collaboration with some of the biggest guitar heroes of today.

Additionally, TC Electronic’s Flashback 2 pedal comes with a looper that’s capable of recording up to 40 seconds of your playing.

Yes, there might be some weird looks that we have Behringer on the list of the best pedals of any kind. However, some of their pedal models actually work rather well, at least for their ridiculously low price.

For instance, we have their VD400 Vintage Delay that has pretty much everything that you need if you need just a simple echo effect.

There are just three basic controls that you find on pretty much any delay pedal – volume (labeled as “intensity”), repeat rate (of feedback), and delay time.

Yes, it has only 300 milliseconds of delay, but it’s an actual analog delay and it’s a budget-friendly pedal. What more could you ask for?

Dunlop comes up as one of the best manufacturers in this game. And that comes as no surprise at all, since they’ve been building their great reputation for decades now.

For the list of delays, we’re bringing their EP103 or the so-called Echoplex. This simple little pedal is way more powerful than it seems at a first glance.

Beneath a stylish-looking simple device comes a very powerful beast that can completely reinvent your tone.

Echoplex is a compact recreation of those quirky-sounding tape-based delays that have remained popular among the lovers of old school tones.

Just imagine the possibilities with this simple little pedal.

Electro-Harmonix is yet another old brand that’s been around for quite a while.

Although typically popular for their amazing Big Muff Pi fuzz pedals, they also have other exciting effects, one of them being the appropriately named Canyon delay.

Of course, just like almost all of the delay pedals today, it features three basic controls.

However, it’s all enhanced with two pro-level features – 10 different delay type presets and a total of 62 seconds of loop time. These are pretty amazing additions to such a seemingly simple little pedal.

Look, there’s no way to avoid mentioning Boss at least twice. But DD-500 is not like your average digital delay.

It’s a full-on echo effect workstation with a surprisingly vast amount of possibilities. In fact, it’s as if you made a special effects processor just for the delay effect.

Aside from its 12 delay modes and ver detailed parameter controls, it comes with an onboard phrase looper and even a selectable bypass type.

Even though it’s a digital pedal, it does an amazing job of replicating those analog delays, including tape-based ones. It’s a bit expensive, but you just can’t go wrong with it.