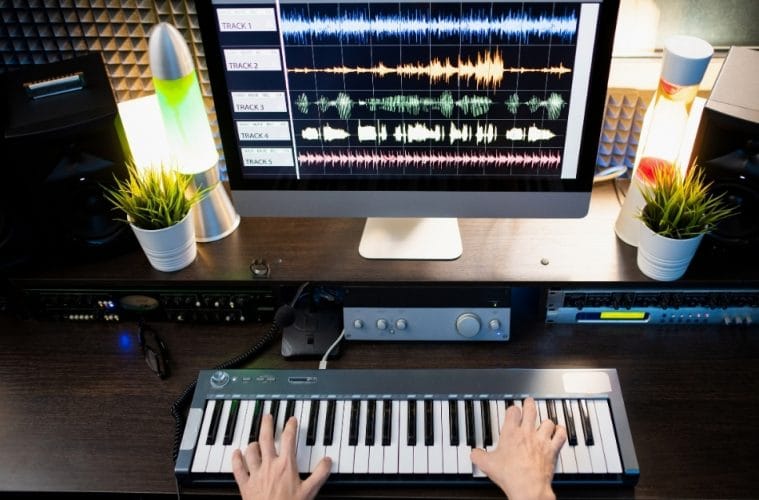 These little software-based gadgets are devices that can be used to bridge various sonic gaps and obstacles, creating analogue-like sounds from scratch.

It’s only natural for aspiring players and performers to search for the best synths to use, and if so, we’ve got you covered.

Today we’re going to discuss some of the best FM synths on the market, starting with:

Native Instruments are among the biggest names in department of software electronics, so it’s quite obvious why we’ve decided to go with their flagship FM8 as our opener pick.

Although pricey, this FM synth program is by far one of the most versatile all-encompassing plugins that this brand has released so far, casting a long shade over its predecessors.

This is a fully digital VST that offers a total of 960 presets, each boasting crystal clear and remarkably authentic FM sounds. Furthermore, this software also packs a robust matrix platform, a dedicated arpeggiator, and well-rounded envelopes.

Although FM8 has its own patches (and downloadable upgrades), it’s also fully compatible with most external FM hardware devices, allowing you to mix and match different setups into a complete, well-rounded one.

The interface of FM8 is straightforward and plain, characterized by slightly oversized knobs and faders, and a 6-octave configurable keyboard.

The Operator is an integral component of the acclaimed Ableton Suite, and luckily for anyone who’s not using this platform specifically it’s a standalone VST that has only one requirement – Live9 Lite.

It’s substantially cheaper than most VSTs in this category, and it’s also significantly easier to use, mainly because it doesn’t have as many features.

Even though this could be perceived as a con, Operator’s forte is its simplicity.

It features petite, highly customizable sections and is meant as a background plugin that will help you orchestrate different tunes and timbres while working on the tracks simultaneously.

The neat little display takes the centrepiece of the Operator, showing you details regarding the most relevant and important parameters of its performance, such as attack, decay, release, peak, sustain, loop, velocity, waveshape, key, and such.

LFOs and filter sections are modest, to say the very least, but they feature everything you need to come up with unique sonic shapes and tones.

As a matter of fact, these sections can be cut off from the mix in order to preserve some extra CPU and RAM.

Speaking of which, Ableton’s Operator is not as spec-starved as some of its ‘bulkier’ counterparts. It’s not as hard on your computer/laptop’s memory, and you don’t need a fancy, super-strong setup to run it smoothly.

Needless to say, it works best with Ableton’s proprietary gear, but the fact that it’s compatible with external equipment speaks volumes about its versatility.

U-He’s Bazille is, without a shadow of a doubt, one of the strongest performing modular synthesizer VSTs out there.

Before we delve into its capabilities and specs, it’s important to note that it’s compatible with macOS, Linux, and Windows, which is not something many FM synth tools can boast about.

First things first, the versatility of Bazille is practically unparalleled. It boasts two individual LFOs and four separate oscillators, each boasting their own set of configurable parameters and settings.

The oscillators sport multiple gate and semitone modulation knobs, as well as a dedicated ‘Fractalize’ section that you can use to carve out fresh, new tones and sounds.

You’ll also be able to utilize numerous pink & white noise slots, a simplified (and highly responsive) sequencer, four envelopes, and a huge array of highly customizable filters, including gain, spread, resonance, and many others. On top of everything, it’s actually pretty affordable.

If you’re mainly working in Fruity Loops Studio (FL Studio), you may want to take a look at Sytrus. This FM synth was developed by Imagine-Line, the same brand that’s ‘responsible’ for one of the finest beginner-friendly DAWs on the market, and it’s actually available for a free preview via your FL software.

Sytrus is an excellent choice even if you’re using other studio tools and platforms.

It’s based on a wonderfully-designed sound engine and sports six user customizable and fully independent operators, frequency modulators, ring modulators, partial-harmonic editors, a massive array of EQ sliders and knobs, and more importantly, a comprehensive Matrix that provides a clear overview of active and passive features.

Furthermore, this VST offers three fully independent filters; speaking of which, there are thirteen types of filters as well as five cutoff-slope features.

Another remarkably interesting feature of the Sytrus is the built-in waveshaper, although most people will probably be more thrilled to utilize the shapes provided by the enormous sample library.

There are a couple of things we didn’t like as much about it, though; namely, it’s slightly harder to use than an average FM synth VST, and some of its features are available exclusively via FL Studio.

Even so, you’ll have to spend quite a bit of time to find a better-rounded frequency modulator for the buck.

Nemesis is Tone2’s creation, and its performance is far beyond formidable.

One of the main reasons why we’ve decided to pull down the curtains with this plugin is that it offers a completely unique NeoFM feature that takes frequency modulation to a completely different level.

A huge number of tones, sounds, and timbres that Nemesis can create are literally unattainable via different software.

Apart from its uniqueness, we also liked most of its more traditional features, such as thousands of patches, top-shelf sound quality, a very intuitive interface, and the sheer fact that it’s incredibly easy to use.

In essence, this VST is wild, exquisite, and much different in comparison to similar plugins. Even though it’s beginner-friendly, you’ll still need some time to get accustomed to the features it comes supplied with.