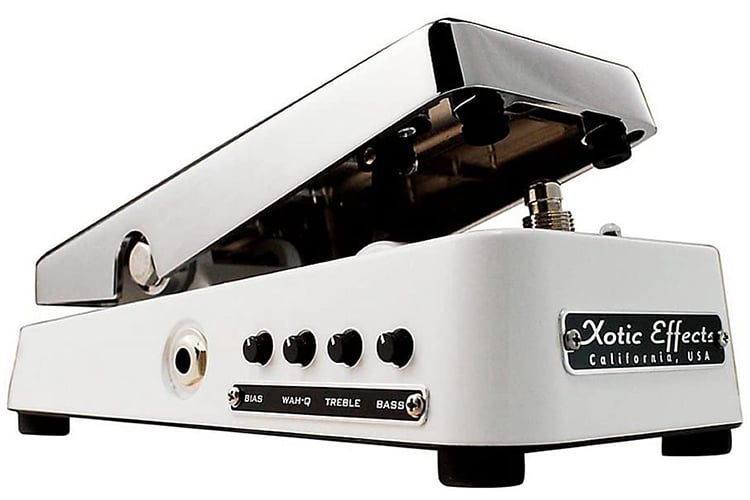 For many decades now, the electric guitar has seen constant evolution and change when it comes to the approach of altering its basic tone.

It’s not only that we have plenty of different effects, amps, and other devices that help us achieve different sonic settings, but we even have improved versions of the old effects that take things to a whole new level.

And it goes both in terms of sonic qualities and in terms of functionality and features. And, of course, one of the most popular effects that pretty much changed the game in the world of electric guitar and modern music, in general, is the wah-wah effect.

This pedal, which adds voice-like qualities to your guitar tone, finds its use both in lead and in rhythm sections.

And, at the same time, it’s extremely fun to use, making your music quite appealing. At the end of the day, it’s one of the best expression tools that a guitarist can find these days.

However, with so many products available on the market today, it can get hard to find the right wah pedal for your needs.

We decided to dive more into this topic and bring you some examples of the best wah pedals that we could dig up online.

Going through these, there will be something for anyone’s playing styles and genre preferences.

Of course, no matter the type of effect, Boss is always one of the top brands to choose from. Although not that well-known for wah pedals, they still have a good one called PW-3.

And it’s a fairly simple pedal with straightforward features. But aside from the basic functions, we also have an additional switch for two modes. There’s the “vintage” mode, as well as the “rich” mode.

The “rich” one is pretty interesting as it brings more of that low end into the equation. On the other hand, the “vintage” mode is subtler and manages to keep things calmer.

Additionally, this pedal comes in a well-made casing.

To put it simply, it can handle even some rougher on-stage settings and you won’t really need to worry whether this pedal will give up on you, even after heavy prolonged use.

After all, it’s not like you’d expect anything less from Boss. PW-3 a simple go-to choice with some versatility added to it.

In case you’re looking for that simple straightforward wah with a classic tone, then Dunlop’s GCB95 Cry Baby, or GCB95, is the way to go.

This is the original circuit developed back in the 1960s with just some minor changes added to it over the years.

With a simple toe-click action, you’ll turn it on and have your way into any lead or rhythm section that you need.

The casing design remains the same over the years, combining simplicity, practicality, and that much-needed roughness in handling.

In short, the pedal gives that classic and somewhat vintage-oriented tone.

However, the response it amazing and it can take you anywhere from subtle wah tones and right into those heavy lead territories.

It’s the ultimate simple wah that spans all genres.

Of course, MXR is another big player in the game of guitar pedals, although not many people remember them for their wahs. Nonetheless, a piece like their MC404 CAE.

Now, this is a fully professional and very versatile wah pedal that you don’t see every day.

Aside from a great sweep and a very easy to control the rocking part, we have an option to choose between two different inductors.

This control completely reinvents the tone and helps you add some diversity in there, all while using just one pedal.

What’s more, we even have an internal Q control, as well as additional gain.

It’s a great choice for anyone who loves to play around with more features.

Steve Vai is one of the best lead guitar players of all time, so it’s pretty obvious to have his signature pedal in this list.

And Morley’s Bad Horsie 2 is all about expression, just like Steve Vai is.

One of the main traits is that it’s an optical wah, meaning that there’s no switching. All you need to do is step on the rocking part and the wah is engaged.

Just move your foot from the pedal, and it will be disengaged.

This wah can also add more boost to the tone, which is very useful for lead sections.

It’s a bit of a larger pedal, which may be a problem for smaller pedalboards, but it’s still an awesome pedal.

Electro-Harmonix is another somewhat unexpected pedal manufacturer that you’d not expect to see on a list of best wahs.

However, when you hear their Wailer, you’d be surprised at how amazing their capabilities are in this particular territory. In so many ways, it reminds us of those old school-oriented wahs, just like Dunlop’s classic Cry Baby.

However, it also has the company’s very unique circuit that gives it that “crying” or “wailing” tone, as its name already suggests. Additionally, this wah is packed into a very light yet durable casing.

It’s a very useful one for anyone who’s looking for a cheap, simple, and durable pedal that still delivers awesome tones.

Lastly, we’d like to mention a high-end professional-level wah pedal that can work well for any setting and any genre.

This one is based on the well-known Italian-made Clyde McCoy wah pedals originally made back in the 1960s.

However, more versatility comes with bias, “Q,” bass, and treble controls that add some significant tone-shaping features in there.

But what’s also really exciting is that you can adjust the pedal’s tension, which you don’t quite see on any examples these days.

It’s not a cheap one, but it’s more than worth it.