Just what kind of advantages modern technology has given us can be seen in music production.

What was usually done with large robust machines and racks is now literally summed up in one small computer program.

For instance, just take any of the old tape delays and you’ll see that same exact warm and “swirly” saturated tones of these effects can be replicated digitally.

But one thing that was always excruciatingly complicated was recording actual drum sets in the studio. Just imagine – every single component needs to be miked up and then processed and mixed individually.

Luckily for all the music producing enthusiasts and professionals these days, there are some great virtual drums worth checking out.

EZdrummer is one of the most popular drum plugins out there.

With this in mind, we’ve decided to look more into the EZdrummer 2, do a brief review of it, and see if it’s good enough of a plugin for your needs. 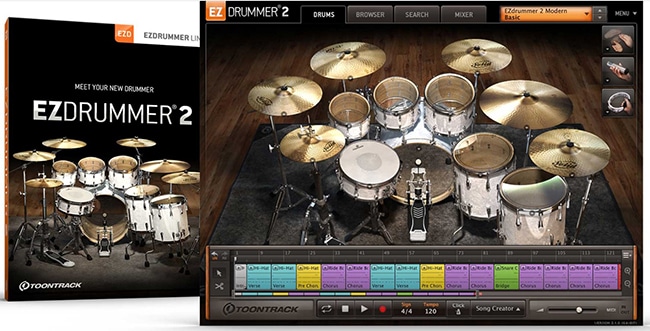 Made by Toontrack a while ago, it was designed to be a convincing replication of an actual drum set and a drum player, with no obstacles to your creative ideas.

It was basically a more affordable (and maybe even more reliable) replacement of your drummer.

First off, the plugin itself requires around 4 GB of space on your drive. Compared to the original EZdrumer, released back in 2006, it features an obviously improved library with samples recorded over at British Grove Studios by producer and engineer Chuck Ainlay, known for working with Mark Knopfler and Dire Straits.

And the so-called Groove Library is very well organized. You can easily access any particular groove at any time, with all of them being sorted into very precise categories.

They’re all grouped according to the genre, playing style, and different intended tempos. What’s more, you can even tap the desired tempo and EZdrummer 2 will provide you with all the possible grooves in that particular bpm territory.

For those who were used to the first EZdrummer, there’s the original browser included onboard for easier drum beat search.

The plugin also allows you to create your own groove presets. This is especially made easy if you have a MIDI controller or a standard electronic drum kit.

However, compared to EZdrummer 1, the EZdrummer 2 comes with a completely new engine. At the same, it keeps somewhat of a similar recognizable layout so anyone used to the original software won’t have a hard time figuring it out.

There are also Song Track and Song Creator features integrated into the plugin. When you drop the desired groove in your project’s timeline, Song Creator immediately shows all the related grooves and fills that you can use to complete an entire song. And by using EZdrummer’s Song Track feature, you re-arrange all of these MIDI blocks more easily.

Then there’s also the Power Hand control which allows you to immediately change individual components on one drum set preset.

But probably the most exciting part comes with the so-called Multiple Hits Emulation. We all know how annoying can those repetitive hits be, especially coming from some simpler and cheaper software.

You can leave the hi-hat or a snare or any other component many times in a row, and the feature will try and make it more realistic and convincing.

Combined with Velocity and Amount controls for each of the individual components, it allows a whole new world of tweaking and drum making possibilities that will help you create some pretty realistic beats.

Generally speaking, EZdrummer 2 is designed to be as simple as possible if you want to create an entire drum track to your project by simply dragging and dropping them in your DAW’s timeline.

It is also possible to map out all the individual components and then add effects to them. However, the plugin itself has its effects which are more than decent.

But if you want more control and detailed control over components with your own plugins, it’s a better idea to map it out and use specialized VSTs that you already have in your DAW.

The library of samples or different drum sets and components is pretty vast. The same could be said about the groove library. It can be pretty convincing if you’re not doing anything that’s extremely complex.

Going over to the aforementioned Song Track and Song Creator features, these can be extremely practical if you just want to add a finished drum track to your song.

However, a more experienced ear would be able to differentiate and even recognize what software is in question.

Don’t get us wrong – the samples, presets, and all of the effects are pretty great. But if you’re trying to do something more complex, they just might not be enough to fool more experienced listeners.

But, in the end, EZdrummer 2 provides you with an abundance of solidly convincing samples to choose from.

Look, it’s generally a great VST and it’s well worth the money. In fact, it can even be used for professional recordings.

If you’re doing any kind of a commercial pop/rock song, it will be more than enough, even with its pre-made drum patterns.

The Multiple Hits Emulation is most certainly a great addition and turns even your self-made grooves into pretty convincing drum tracks and drum parts.

To conclude – for its price, it’s definitely a great piece of software.

But if you’re planning to do some extremely high-level production kind of stuff, then you might want to check out some other software.

For instance, Superior Drummer 2 will most certainly provide more detailed and nuanced control compared to the EZdrummer 2. Then again, Superior 2 has a 60 GB library.

At the end of the day, if you’re making a drum-centric song you’ll probably want to have an actual drummer instead. Not even Superior 2 will be able to help you there.