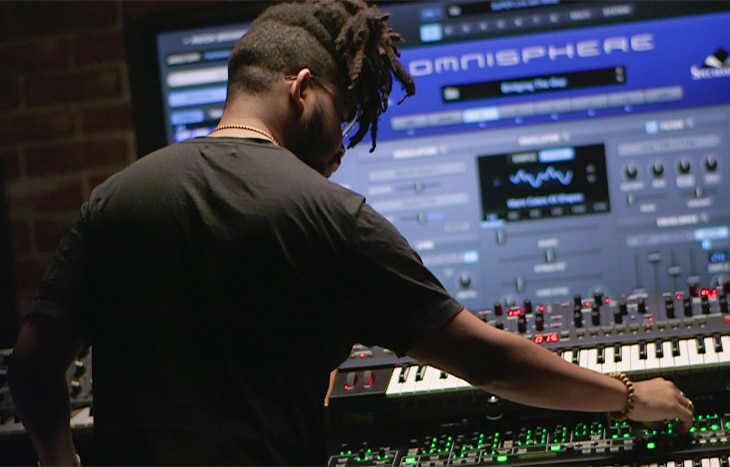 Free VST like Omnisphere- High end Synths on a budget

Spectrasonics flagship VST Omnisphere has been on the radar of many skilled and seasoned producers, but let’s face it, not everyone can afford it.

Although it packs some of the most amazing features in the virtual instrument world, there are ways to emulate its performance with other free VSTs.

We’re here today to showcase some of the finest free VSTs that can provide you with fairly similar benefits to that of Spectrasonics’ Omnisphere, so let’s get to it, shall we?

Omnisphere in a nutshell

Just like you would expect from a boutique VST, Omnisphere packs a massive, eclectic array of well-rounded features.

It packs an enormous library that boasts over 10,000 sound types, including various effects, samples, colors, timbres, and all sorts of other tone-shaping bits of sonic pieces.

The newer version (Omnisphere 2) is even more versatile, bringing thousands of additional patches to the table.

In comparison to many budget and free VSTs, Omnisphere rocks more than 100 wavetable formats, eight LFOs, and twelve envelopes. Its base engine is staggeringly fast and reliable, and to top it all off, the main platform screen is easy to navigate and operate even by beginners.

As mentioned earlier, it is pretty expensive, so it’s no wonder you’re looking for a bit cheaper alternatives. Now that we’ve established that Omnisphere boasts a ridiculously high level of performance, let’s proceed to free VSTs that are capable of getting close to it.

Tyrell N6 is, essentially, a simplistic synth VST that offers easy accessibility, dozens of highly customizable features, and most importantly, a very intuitive layout of its numerous settings.

We really liked the fact that it combines analog elements with traces of digital settings, although its main platform is old-school to the bone.

First and foremost, the main reason why N6 can’t really compete with the versatility of Omnisphere as a standalone VST is the fact that it offers only a handful of selectable waveforms.

Naturally, this is pretty common for free VSTs; on a bit brighter note, you’ll be able to create your own shapes once you get the hang of this virtual studio tool.

The mixer channel features two oscillator faders, a sub fader, noise, ring, and feedback faders, all of which can be adjusted between levels 0 and 10.

All things considered, this is a powerful tool, and even though it seems pretty basic, it offers high versatility to those who are patient enough to toy around with its plain-looking features.

The SymptOhm is free VST software that can easily come in handy where other similar programs fall short.

Simply put, SymptOhm is a no-brainer if you’ve just started out as a music producer or a DJ.

It doesn’t sit well with sound engineers as it doesn’t offer many mixing options, but as far as the compositional side is of concern, it’s got you covered.

It features more than a thousand presets and built-in samples and MIDI chunks, and most importantly it’s absolutely the easiest VST you can use.

Now, the main downside of SymptOhm is its overly accentuated focus on the presets while mixing is almost completely neglected.

It’s very easy to use, and obviously it’s absolutely perfect for beginners, but that does not necessarily mean that it will be useless to professionals; in fact, it’s quite the contrary.

The creative, quirky, and to a certain extent idiosyncratic samples and presets contained within SymptOhm’s library feature numerous gems that might be exactly what you were looking for.

None of the built-in sounds and tones is overly processed, and there’s plenty to choose from.

Kairatune is, essentially, a Sci-fi-looking VST packed with a variety of very unique features. It boasts hundreds of presets and samples, a pitch-bending platform, multiple oscillator panels, and a full arsenal of other mixing features.

This is mainly a post-production VST that will allow you to customize and fine-tune the tone of your tracks in great detail.

Furthermore, it works in perfect synergy with the SymptOhm, and fills the gaps that are its most notable pitfalls.

While it’s certainly much more complex, it’s also very fun to use due to all the LED-simulated colors and neatly ordered sections, so it’s pretty hard to get lost.

Again, this is a free VST that doesn’t necessarily provide the same level of versatility and well-roundedness as Omnisphere per se, but when combined with other free virtual studio tools you will be able to achieve very similar effects.

Most free VSTs come supplied with modest wave-shaping abilities, so we’ve decided to add one that specializes in this particular field of performance.

HoRNet’s Harmonics is a virtual studio tool that fulfills a singular role – it’s meant to help you create the most exquisite waveforms in the simplest fashion possible.

Obviously, it’s one of the most straightforward VST software models that you can find out there, but it’s extremely limited as a standalone program.

There are hundreds, if not thousands of free virtual studio tools on the Internet, and sifting through all of them is excruciatingly time-consuming, to say the very least.

We’ve taken the liberty of handpicking only the most useful ones that, when combined, can provide you with the same amount of versatility and tonal qualities that using Omnisphere would.

Some of these plugins are very simplistic while others are fairly complex, so it would be fair to say that you’ll need some time and skill to utilize them in your arsenal.