With so many different styles and constant changes in trends, demands for new processing and mixing techniques are always on the rise.

Whether you’re an independent hobbyist making music from the comfort of your home, or a full-blown professional producer, you always need to be on the lookout for the different vocal processing plugins and techniques.

While we’re at it, we figured we could take a closer look at one of the most interesting vocal processing software that came out not so long ago.

The product in question is VocalSynth 2, which was conceived and developed by iZotope as the vocal processing “sequel” to the original version.

What initially got our attention here was the abundance of different features and its use in both processing and mixing stages.

There’s a lot of stuff to look into, but we’ll do our best to be as brief as possible and make our verdict. After all, the company behind products like Neutron or Ozone is worth checking out again, right? Let’s dig into it.

First off, the plugin is, in so many ways, designed according to the first VocalSynth version.

The signal first goes through the Pitch Correction part, and then into the full library of different synth-like effects. This altered signal is then sent to the section filled with the classic “stompbox-style” effects.

In the end, both the dry and processed signal are blended in the final mixing process.

VocalSynth 2 comes with five modules, or engines, onboard. So we have Vocoder, Polyvox, Compuvox, Biovox, and Talkbox.

All except Polyvox have their input signal modulating the carrier synths in the Auto mode or can work in the so-called “Sidechain” mode.

Polyvox, on the other hand, does harmonies and pitch correction. What’s more, you can use external MIDI instruments for controlling internal synths and adding harmonies.

The addition of the Biovox module is pretty exciting. The main idea here is to help alter the complete vocal tract. Well, it won’t alter your vocal cords and other parts but will help you change the singing style to some extent.

There are controls for formant shift, “Breathiness,” “Clarity,” and “Nasality.” The clarity control here tweaks the balance between the original vocal signal and the carrier synth signal.

What’s more, Biovox has an advanced view which gives even more controls, like the “Vowel” pad. You can somewhat turn the voice coloration towards the desired type of vowel, even blend a few different types of vowels together.

Going over to synths, there are two analog-inspired Oscillators, as well as the Noise oscillator and an LFO. Synths also come with a vast library of presets.

Now looking into the plugin’s graphic interface, the whole idea was to make it similar to other of the iZotope’s recent products.

There’s also the Anemone visualizer which gives the user all the visual info about the effect each module does to the signal. We can still find the old Wave Meter from the previous version here.

Speaking of the graphic interface, it’s designed to have more functional features.

For instance, each of the five modules has an advanced menu dropdown view, which certainly makes things a bit more clear. This dropdown always fills the center of the interface, while it replaces the Output and Voicing/Pitch segments, as well as the visualizer.

Overall, it’s a fairly simple yet clever addition that helps with easier navigation.

The contents of these panels differ between modules, but each has its dedicated panning control.

Compared to the old VocalSynth, this is a whole new functionality feature, as you can now pan each module separately. The same goes for low and high-pass filtering.

What we quite liked is the overall hands-on practical approach and the intuitive design that makes everything look so clear. This is, in our opinion, especially the case with the synths.

VocalSynth’s first edition lacked many of the functionalities that are now available in the second version.

On the other hand, in practice, better results can be achieved when using the external synth in the Sidechain mode as the carrier. Especially if we’re talking about the Vocoder module.

Biovox was, by far, the most surprising (and jaw-dropping) addition to this entire plugin. We have the mindblowing options for altering the original voice, to the point of where you can’t even recognize the original singer, while it still remains convincingly realistic. You’ll have to hear it in order to believe it.

We would also like to point out the great addition of iZotope’s “communication” between their plugins. So there are some controls and additional functionality if you’re also using iZotope’s Neutron 2 or Ozone 8 plugins. 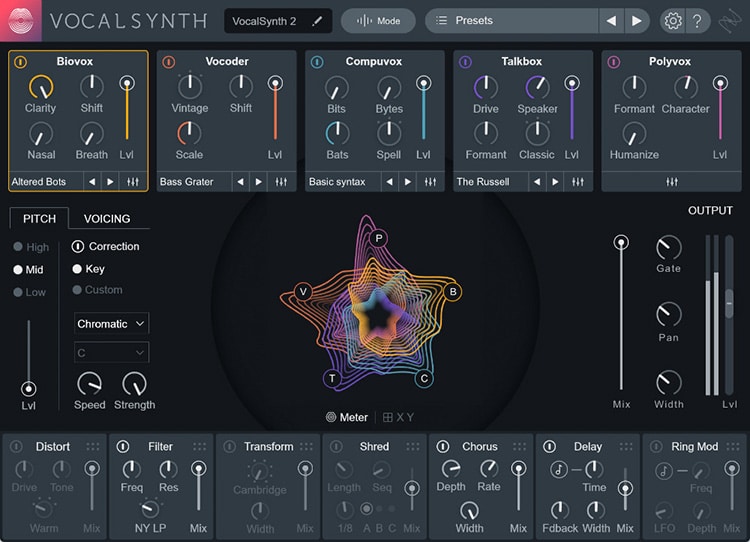 It’s no secret that this plugin requires some experience. After all, with so many additions and features, you can’t exactly expect it to be a beginner-friendly product.

Somewhat of an expensive product, although not unobtainable, it sits somewhere around $200. So it’s pretty clear that this is a fully professional tool for advanced vocal processing and mixing.

The advanced view, in general, makes it way easier to use, compared to the previous VocalSynth version. If we’re really going to nitpick, then there are a few complaints about how the synth section works. On the other hand, this is far from a dealbreaker, and the price is still more than justified for such a plugin.

Anything that you want to do with vocal processing, it’s possible using iZotope’s VocalSynth 2. No matter the style, genre, or the particular era of music that you’re covering, this one comes in handy for all purposes and can completely shift the vocal style to unrecognizable, yet great-sounding, levels.

Again, this is a fully professional tool for advanced users. We wouldn’t recommend it for hobbyists with modest home studios, as they won’t be able to use its full potential.