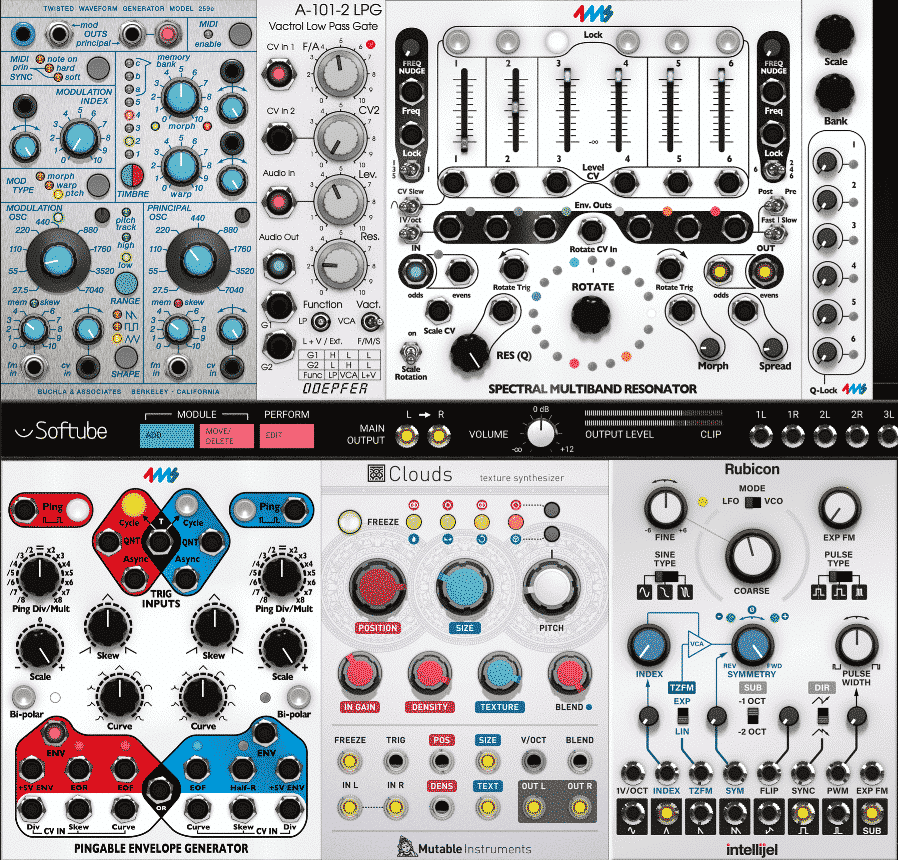 Modular synths and eurorack systems are a nifty piece of hardware. They allow you to build a system, adding or taking out as many different modules as you want.

However, these aren’t accessible to everyone. They are expensive and require some technical skills.

With that in mind, here are the best 3 software alternatives to these systems.

Softube Modular is the only official software that emulate modules by Doepfer, Intellijel, Buchla, 4ms and Mutable Instuments.

I have compared several times Softube with tue real Eurorack modules and it is really hard to notice the difference.

Doepfer modules sound incredibly close to its hardware analogs. Buchla 291e oscillator is probably one of the best sounding software oscillators. 4ms SMR, Mutable Instruments Braids, Rings and Clouds – all those modules sound very similar even if you do audio rate emulations.

The only downside is the CPU load. Once you have added lots of modules and do complex modulations it becomes CPU heavy.

To get an idea of how the interface looks like, check out the video below:

It is by far the best sounding modular emulation.

Voltage Modular is a pretty new fast growing platform. Even though analog emulation doesn’t sound as authentic as Softube Modular, the power of this platform is an open API for modules.

Other developers have the ability to develop their own modules and sell it via modules marketplace.

The most interesting thing here is a set of 30 PSPaudioware modules. PSP is a well known company in VST world.

And we already have seen them porting their plugins to rising platforms like Auria for iPad. This time they made a re-engineering their plugins and made their famous effects to be available as modules. And they’ve added some cool new modules to the collection.

After utilizing extensively both voltage and softube, it is my opinion that softube is the superior eurorack/modular emulator.

Voltage has the key advantage of having an api, thus offering a wide selection of modules, but in terms of sound quality and closeness to the original hardware versions, softube takes the prize.

u-he has an amazing track record on recreating best analog synth in software.

U-he Bazille is not an attempt to emulate Eurorack but rather 5u modular systems that are famous for its fat analog sound. Want it in software? Give Bazille a try!

While this article was focused on best-sounding emulations, it is hard to miss several other options.

VCVRack – became a huge platform where tens of developers are releasing their new modules weekly. Most of the modules are free.

Though there are several problems with VCV:

– it doesn’t sound as good as plugins mentioned before

– it is not a plugin but standalone software, that you can integrate in your DAW with a VST adaptor

NI Reaktor Blocks – another great platform with hundreds of free modules. Again, it doesn’t sound as authentic as Softube or u-He. But it has few modules that are getting pretty close. And of course, Reaktor is a must-have for any music producer.

Reason Complex-1. Propellerhead Reason by its nature is a modular environment and probably first software that brought an idea of CV modulations in software. Complex-1 is their recent synth designed around Buchla-style synthesis. It doesn’t sound like Buchla but it still sounds good and workflow is amazing – you can get cool sound pretty fast, modulate it with the sound from other Reason devices and combine with other Reason synths.

Arturia Buchla Easel – I had a chance to play with two different Easels but Arturia doesn’t sound close to that. Though its user interface and workflow is amazing. You can say same thing with their emulation of Moog modular system.