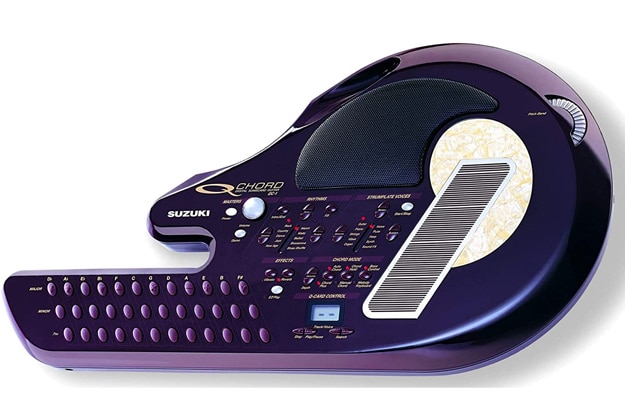 There is a lot of joy to be had with sophisticated, complex instruments – like keyboard workstations.

However, at certain times, you’d just like to have a go at an instrument that’s fun, simple, and somehow more immediate. And when you first lay eyes on a Suzuki Q-Chord QC-1, you may very well think that you’ve found just what you need.

You may think that you’ve found a handy alternative controller. However, the more you use it, the sooner you’ll realize that it’s a fun preforming instrument or songwriting tool, but not necessarily the controller you desire. 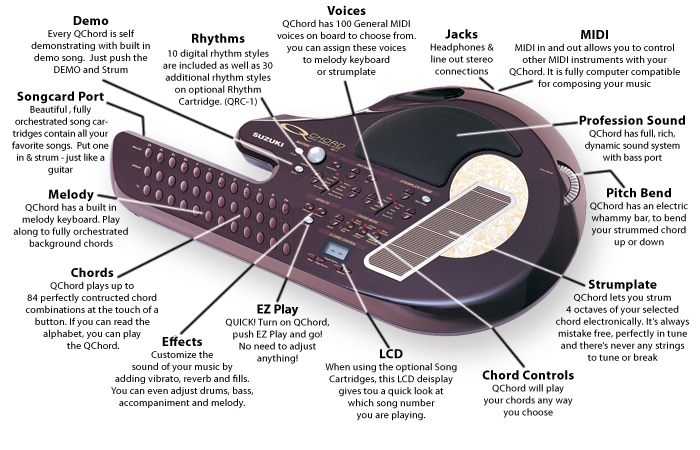 Suzuki calls its pear-shaped, burgundy-colored Q Chord a “digital song-card guitar”. However, in reality, its something akin to an electronic Autoharp, with chord buttons alongside a Strumplate letting you (proverbially) strum the chords.

Its “neck” contains 36 chord buttons assembled in three rows. The front panel has a 5-inch speaker that comes with bass porting, as well as a volume dial and an assortment of other plastic buttons, mostly controlling different operation modes.

The upper-right part of the Q-chord is where you’ll find the pitch-bend wheel.

On the side, you’ll see the MIDI ports, a jack for an AC adapter, and an 11/44-inch audio output that can serve you as a headphone jack.

At the end of the neck, you can see a port for a Q-card song cartridge, letting you play with popular rhythm patterns and song sequences.

The arguable main attraction of the Suzuki Q-Chord is the Strumplate; spanning four octaves that you play by using the tip of your fingers to stroke. You can also tap, though you’ll find the response somewhat poor.

You’d have to hit a very narrow sweet spot to get an even response to even slow taps.

You can trigger chord tones using the Strumplate via one among ten different sounds on the front panel: Sound FX, Synth, Harp, Flute, Voice, Organ, Vibes, Strings, Piano, and Guitar.

And if these aren’t quite up to snuff for your purposes, you can use other GM sounds with the MIDI Program Changes. You’ll also be able to control sustain and relative volume.

As I’ve mentioned above, the Q-chord is not really anything more than a home instrument; you won’t be able to use it for any truly professional purposes.

Its focus is on playing along with melodic fill, bass, chord, and drum auto-accompaniment. The Q-Chord sections control effects, Q-card, Strumplate voices, rhythm, and EZ play. Barring drums, every other accompaniment section may be individually turned off.

You can set your accompaniment up using six buttons in chord mode. Auto Chord gives you basic comping, the chord is sustained by Chord Hold, and Chord Plus will add any other auto-accompaniment parts.

Also, Manual Chord will trigger a constant chord without including any other accompaniments, and Bass Control will give you any appropriate patches and the bass line.

Obviously, you can mix up various combinations. Conversely, you can use a melody keyboard feature to perform individual notes using the chord buttons. You will identify the notes via a keyboard overlay on the bottom two rows.

The Instrument In Practice

Regardless of what instrument we’re talking about, the way it handles in practice matters a lot. And while this is a pretty fun experimental instrument, there’s no getting around one simple fact – regardless of how you hold it, playing won’t be anything near comfortable.

It comes with rubber feet, so you may lay it on its back and play it right-handed, but then the location of the pitch wheel is pretty inconvenient – though that’s the position for playing that the manual shows.

However, seeing as this is dubbed by Suzuki as a digital song card guitar, the chord buttons look like they’re designed to be played upside down; like a guitar neck.

So, if you use it like a guitar, with the optional strap accessory or placed on your knee – you’ll be able to use your right pinkie to access the pitch wheel and strum. Also, the chord buttons are aligned perfectly with left-handed playing.

However, that’s where the cutaway and plastic horn, obviously designed to make the instrument look more like a guitar, make the playing uncomfortable in terms of using the left hand for chord buttons.

All things considered – it’s probably better to play it when it’s lying flat, but that’s still a poor choice. 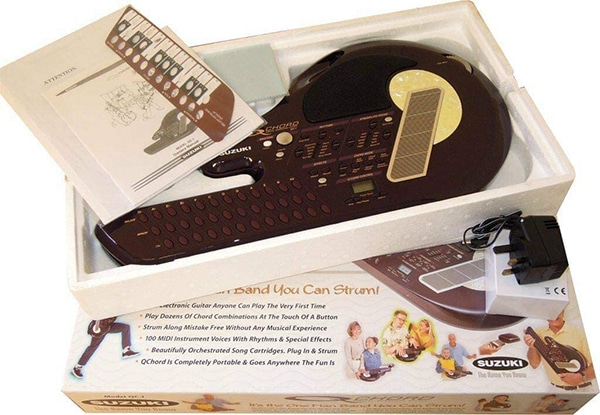 At the end of the day, the Q-chord isn’t as shallow and one-time as the initial contact with it may suggest. It’s definitely well-manufactured, and it can give you hours of fun as a stand-alone music instrument.

In terms of low-end household instruments, its sound isn’t that bad either.

And in tandem with a GM module, you can use it for basic songwriting. Unfortunately, it isn’t without its drawbacks. For one, the selection of MIDI data that it sends is odd, and the lack of an option to disable drums as well.

Plus, technical issues aside – it’s simply not that well-designed when it comes to ergonomics. If the instrument is not comfortable to hold, there’s really not that much else to say about its practicality.

Basically, if you wanted to use it as a MIDI controller, I’d advise looking elsewhere.

As it stands, this is an instrument with some home entertainment value and not a broad variety of MIDI features.