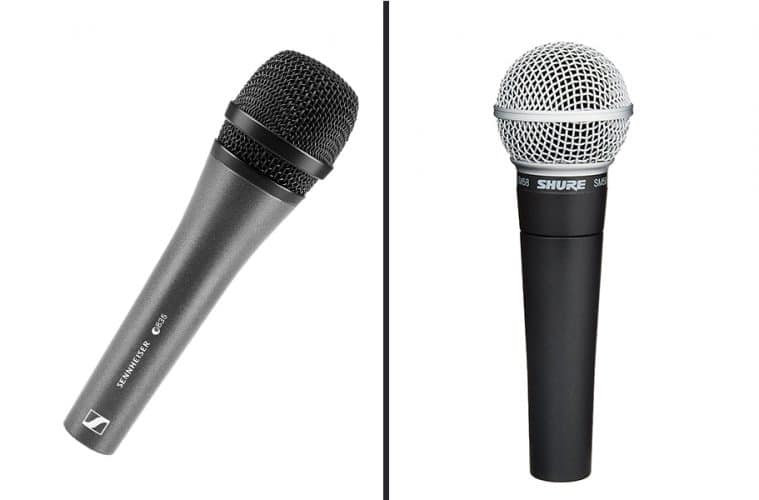 Sennheiser and Shure are the names most musicians who are worth their salt have heard already; these brands are ‘responsible’ for numerous groundbreaking instruments and gear pieces that have graced the shelves of both physical and virtual marketplaces worldwide, and today we’ve decided to take a gander at SM58 and E835.

These are, in essence, two low-end microphones that boast performance levels which greatly surpass their price tags.

They sound awesome, they’re pretty versatile, and we aim to delve deep into details that could explain their exact value for the money.

Without any further ado, let’s get straight into it.

Shure SM58 in a nutshell

In simple words, Shure’s SM58 is a dynamic microphone with a super cardioid pickup pattern; it boasts a frequency response range of 50 Hz to 15 kHz; its output impedance is measured at 150 Ohms, and it is light as a feather with only 0.66 pounds of weight.

It sounds great, especially given the fact that it’s barely more expensive in comparison to an average budget microphone, and it’s certainly built to last.

It kind of looks a bit basic, though, and it’s only available in one color style option.

Sennheiser E835 in a nutshell

If it weren’t for the color and size, most people wouldn’t be able to tell the E835 from SM58.

This is a dynamic microphone with a super cardioids pickup pattern (exactly like Shure’s SM58), and it weighs almost the same (0.73 pounds).

The frequency response range of the E835 is a bit broader, spanning from 40 Hz to 16 kHz, and its output impedance is almost twice as strong in comparison to the SM58 (350 Ohms).

Just like we’ve mentioned a second ago, Sennheiser’s E835 and Shure’s SM58 share the same type of design; they’re both dynamic microphones with super cardioid pickup patterns; this makes them extremely versatile for musicians; at the same time, it makes them really hard, and maybe even a bit unwieldy for podcasters, influencers, YouTubers, and such.

In terms of aesthetics, the Sennheiser’s E835 features a grey finish with a black screen whereas Shure’s SM58 has a black finish with a silver screen.

This is entirely a matter of subjective preference, especially given the fact that these are basically the only colors available.

All things considered, we have an obvious draw; both microphones are designed the same, and they look pretty much alike.

The dimensions of Shure’s SM58 measure 6.3 inches by 2 inches while the dimensions of E835 measure 7.08 inches by 1.88 inches. Obviously, the SM58 is just slightly smaller, but the difference is so small that it’s negligible.

Now, as for the durability part; Shure’s SM58 is built to last, just like the vast majority of Shure microphones. It features a robust metal construction, and it pretty much feels durable to the touch.

The windscreen also excels in this particular field of performance, which is the reason why many live performers lean on it as their go-to instrument.

The situation with Sennheiser’s E835 is not much different; it’s made of almost exactly the same materials, which provide it with almost the same level of durability. In fact, even the windscreen is as robust as the one that SM58 comes supplied with.

Again we don’t have a clear winner; it’s obvious that there are little differences that set these two microphones apart, but none that are significant enough to actually have an impact on their overall performance.

Now, even though the SM58’s range is way better than average, Sennheiser’s E835 beats it by hair’s length. Its range is extended in both ways, which means that it can pick up on even lower frequencies (by 10 Hz) and even higher frequencies (by a full kHz).

These microphones are similar in a plethora of ways, and that includes their intended application.

Both SM58 and E835 are excellent-quality microphones for both on-stage performing and recording.

The main reasons why they are so versatile are that they come supplied with top-shelf features and excellent frequency response ranges.

Ironically, these microphones cost almost exactly the same. In fact, the difference might be a couple of cents, but they’re in the exact same price range, without even a full dollar separating their price tags.

It probably would be easier to point out the differences first (since they are in smaller number), but for the sake of formality, let’s number the many similarities that these microphones share between themselves:

It was pretty hard figuring out which difference between these two microphones was actually the most important one, but after taking the fact that there aren’t so many into consideration, we’ve figured it’s the frequency response range.

Basically, the only edge E835 has over SM58 is the fact that it has a slightly broader range (both lower and upper); it might be worth mentioning that SM58 is slightly lighter, although both are basically equal in terms of durability.

Although E835 is slightly better than SM58 in a couple of performance aspects, they’re very much alike.

In fact, most people wouldn’t be able to tell the difference between these microphones, aside from bands that are tuned in either super-low or super-high tunings.

Overall, you won’t make a mistake by picking either one.