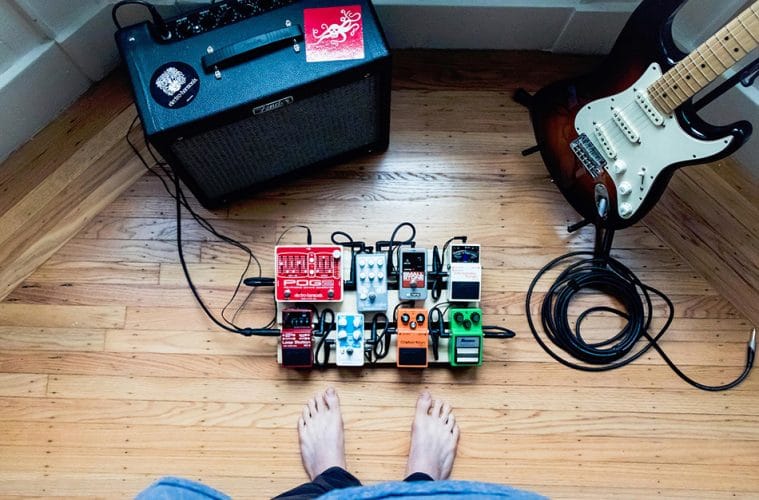 The search for tone is a never-ending quest most musicians embark on after trying out a couple of different instruments and amps.

Most of tonal ‘originality’ is in the fingers of the players, though, but there are other means by which you can influence how your instrument sounds like.

Not many people are in such a position where they can afford to buy dozens of amps and guitars, so the best alternative is to shape up your sound with guitar pedals.

Today we are going to talk about when and why you should use different kinds of guitar pedals, which work in harmony, and how to create the ultimate setup in the easiest way possible.

A foreword about guitar pedals

Guitar pedals are meant to introduce ‘effects’ that directly influence the behavior of the instrument.

Some alter its tone slightly while others drastically change it, and knowing which pedal to use will mean the difference between shaping up a unique set of voices and ruining your guitar’s tone.

The smartest way to approach guitar pedals is to get to know your instrument a bit better and see which models will complement your axe the most.

Guitar tonewoods & pedals that work best with them

Guitars made of alder and basswoods are in a very balanced position on the tonal spectrum, sitting right in the middle between warm and bright.

Pedals that drastically affect the tone will have a slightly diminished effect on them, but on the upside, these guitars typically work great with every guitar pedal type.

Mahogany-made guitars are dominant in the lower-end price point categories; cheap guitars typically feature these tonewoods and are much warmer than, for instance, guitars made of Walnut.

The reason why you should consider the composition of your guitar is quite simple; axes made of bright-sounding tonewoods typically work best with overdrive and distortion pedals, pitch-shifters, and phasers while warm-sounding guitars tend to get the most out of wah-wah pedals, delays, and other ‘cleaner’ effect types.

At the end of the day, you can always even out the differences your guitar has with tone knobs on the amp you’re using, but it wouldn’t hurt to go with the flow rather than trying to ‘swim upriver’.

There are far more amp brands and manufacturers than there are guitar tonewoods, which makes the issue of choosing the perfect pedals for your amp a fairly complex question, so let’s stick with the basics for the time being.

The most common types of guitar amps are analog and digital amps. In short words, tube amps lend their unique tone and tonal versatility to pedals while digital amps are basically meant to be used as they are.

Regardless of whether you have a solid-state or a tube amplifier, analog amps will help you find a ‘starting’ tone, which you will be able to shape even further with guitar pedals. Think of an analog amp as a sketch of a painting that requires the finishing touches.

Digital amps normally feature ‘artificial’ presets based on analog amps. Even though you’ll be able to make tweaks and adjustments on them, a good deal of your pedal’s tone-shaping potential will be lost on them.

In conclusion, you should avoid major tone-altering pedals, such as distortions, phasers, and pitch-shifters if you are using a digital amp, whereas you are free to use any pedal you like if you own an analog one.

Types of guitar pedals and when to use them

Let’s get started with the main course – when and why to use each guitar pedal type. In this section, we will briefly explain the most notable characteristics of each guitar pedal before stating where they can be efficiently used, where they should be avoided, and why.

Whenever there’s talk of guitar pedals, most people immediately picture a distortion pedal.

What all of these pedal types have in common is that they ‘clip’ the guitar’s audio signal; this way they are reshaping the structure of the instrument’s waveforms by adding warm and bright overtones at the same time.

Plainly speaking, distortion effects add ‘grit’ to the tone in varying intensities. Overdrive and fuzz pedals are a bit ‘weaker’ than rock-hard distortion pedals, but they’re all meant to recreate the sound of a high-gain analog amp.

Interestingly enough, these pedals work perfectly well with analog amplifiers, and you might think ‘why do I need a high-gain amp sound if I can already achieve it on my amplifier?’; basically, gain ‘stacks’, and you will be able to merge different gain stages of different gain frequencies this way.

You should use distortion, overdrive, fuzz, and crunch pedals to add punchy overtones to your tone, and this can be done in any number of scenarios. In mellower musical styles distortion effects are used to pronounce solos or dynamic bridges whereas these pedals are active non-stop in genres such as rock and metal.

Distortion effect pedals are clear-cut and very pronounced, so they generally don’t leave much space for experimentation with music genres they aren’t already popular in.

On the flip side, there are certain music styles where distortion effects would work against you. Genres such as polka and pop music, as well as musical styles that do not have the guitar in their spotlight wouldn’t welcome distortion pedals with open arms.

You may hear faint and weakly distorted guitars in certain pop songs, but you may not necessarily need a distortion pedal to achieve such sounds and timbres. Usually, a mediocre analog amp is all you need, provided that it has at least a 3-band EQ.

Amplitude effects alter the dynamics (volume) of your guitar. Several types of pedals fit into this category, including Booster pedals, Compressors, and Noise Gates. Since these three serve three distinctly different purposes, let’s address each of them separately.

Boost pedals (boosters) enhances the audio signal’s amplitude. In simple words, it ramps up the volume, exceeding the limit of the amp.

Boosters are ideally used for guitar solos, as they can be used to immediately strengthen your guitar’s volume without any signal loss.

Prolonged use of booster pedals will inevitably make other players struggle to keep up with the audio output, so it shouldn’t be overused.

Compressors are basically catalyst pedals that balance rampant sounds and noises. They are capable of taming punchy lows and calming thundering highs automatically. Generally speaking, compressor pedals ‘crop’ the dynamic range of your instrument, preventing the sounds from leaving the pre-configured bounds.

Compressors are a necessity in complex, multi-pedal signal chains where the signal is all over the place. These pedals create a safety net that will prevent the tone from becoming unexpectedly warmer or brighter, which makes them perfect for any kind of pedal chain.

The only time you don’t need a compressor is if you are not using other pedals, to begin with.

Noise gate operates in a way that is completely different from compressors; rather than containing the frequencies, they keep background static and hum at a minimum.

To put it plainly, noise gate pedals do not ‘eliminate’ hums, hisses, or static; they simply replace these sounds by even quieter ones that can’t be perceived by human ears.

If you are standing close to your amp on stage, or if some of your pedals are creating feedback or static, a noise gate pedal will be able to take care of the issue.

Sometimes static and feedback sounds are what musicians are after, especially in rock and metal music genres. Noise gate pedals will prevent you from finding these sounds.

While dynamic-altering pedals are generally active all the time, filter pedals are passive most of the time and are only activated when such effects are needed.

The wah-wah pedal is a perfect example of a filter pedal; it alters the entire frequency spectrum of the guitar when activated, creating unique and peculiar noises.

Filter pedals change the guitar’s tone drastically, and they are best utilized when you want to accentuate certain parts of the song, such as the ending of a solo for example.

Filters rarely work well when used as standalone pedals, so you shouldn’t rely on them too much if you don’t have a quality distortion/overdrive pedal in your rig as well.

Modulator effect pedals change the strength of the signal, by either mixing it with another signal or by splitting it in two. Some of the most popular modulators are chorus pedals, flangers, phasers, tremolos, and vibratos.

Generally speaking, all of these effect pedals affect the strength of your guitar’s signal, creating different variations in terms of pitch.

Chorus pedals aim to replicate the effect of actual choirs or string orchestras; these pedals split the signal into numerous smaller fragments, each being slightly different than the next in timbre.

Flanger pedals create artificial effect sounds that resemble those that airplanes make; phaser pedals are quite similar, but instead of mixing two distinctly different signal parts, only one part is actually altered (phased).

Modulation effects can be dramatic or mellow, dramatic or subtle. They can completely change the dynamic and feeling of a song, or they can simply add nuanced details, making a riff a bit fuller, but unchanged.

These pedals are generally great to use in practically every scenario as they enrich the guitar’s tone and timbre by adding extra layers to the signal.

Modulators are very difficult to master, and oftentimes they can lure musicians into thinking that they need ‘more’. Actually, ‘less is more’ applies here perfectly, especially if you don’t have a well-shaped idea of what fragments of the song you want to modulate.

The pedals that fall under this category are so different that a general definition wouldn’t be able to encompass them all.

What they all have in common is that they all change the time at which the signal ‘hits’, whether it be by delaying it, making it ‘echo’, or playing it back as a ‘loop’.

Delay pedals ‘duplicate’ the signal, playing the second one back right after the initial one. The duplicated instances and the speed at which they are emerging after the original signal can be specified with most pedals.

Loop pedals are basically used to create ‘backing tracks’ or better said, ‘backing riffs’. Musicians can record a lick with them and play it back within a repeating cycle.

Reverb pedals can be used to simulate sounds that would have otherwise be produced in acoustic spaces, like for instance halls or churches.

Just like modulators, time-based pedals can be used to fill in the sonic gaps in your guitar’s tone regardless of the situation. They can make your tone sound a bit fuller, and they are perfect for experimentation with other guitar effect pedals.

Time-based effects create ambiance but take away the ‘clean’ bit of the song. They shouldn’t be used with hooks and parts that are meant to be ‘catchy’.

Guitar pedals are wonderful tools that can completely reshape how an instrument sounds and projects through the amp.

We hope that we’ve provided you with useful tips on how different types of pedals can be utilized, and keep in mind that these are only pieces of advice; you are free and even encouraged to experiment and think outside of the box. After all, that’s what music is all about.

Cheap Synthesizers for Beginners: What to Buy in 2020