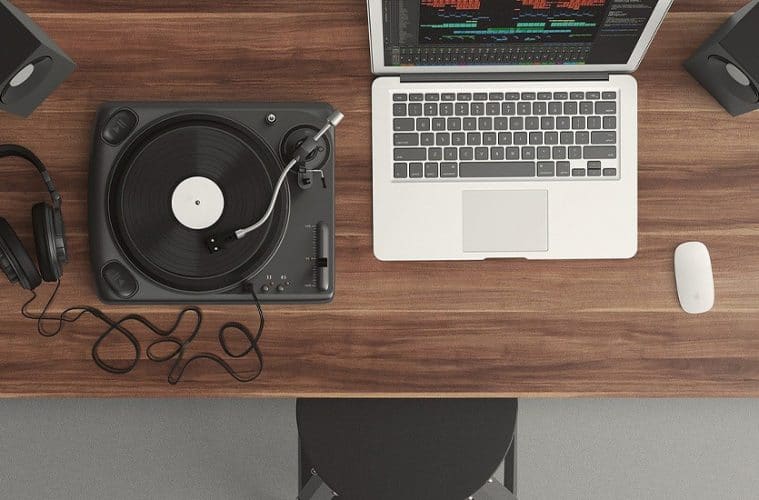 While the versatility and gear of actual studios are appealing, many people simply can’t afford $500/hour sessions and look for alternatives.

The idea of setting up a ‘home’ studio sounds like a lot of work, but actually, all you need is basic gear (instruments and a microphone) and a decent laptop.

Now, you shouldn’t just get any laptop – there are spheres of performance where investing more than a couple of hundreds of dollars is overkill, but then again, you don’t want to go cheap with things such as memory, processor, and such.

We are here today to give you a quick look at what laptop specs for music production should look like, so let’s dive straight to it.

The CPU is the single most important component of your laptop when we’re talking about music production.

Basically, processors are in charge of all the processing tasks, which include simple ones such as keeping your laptop running, over recognizing your plugins and software, to allowing the process to run smoothly.

It would be completely fair to say that the quality of your laptop’s CPU will determine more than 50% of the outcome of the production process.

Going with slightly cheaper options may result in lags and stutters; going with budget options may even lead to system crashes while opting for ‘stock’ (factory) CPU will simply result in you not even being able to run the spec-starved programs.

In essence, this means that this is the component you’ll want to invest in the most, but contrary to what most people assume, even the best CPUs won’t help much unless they’re compatible with other components.

The first things you’ll need to understand about processors are the cores and frequency they operate on.

Simply put, the higher the number of cores, the easier the CPU can distribute the workload; operating frequency basically translates to ‘how fast your CPU is’.

Random Access Memory – or shortly ‘RAM’ – governs the ‘working memory’ of your laptop.

This is where your laptop stores external information, such as data acquired and processed through plugins and other relevant programs.

Most music production programs ‘eat-up’ quite a bit of RAM, because otherwise, your laptop will take hours to load all the samples, presets, VSTs, and virtual instruments.

That’s why it’s imperative that you invest in RAM quite a bit, but not as much as in your CPU.

Simply put, RAM is ‘upgradeable’, which means that you can always return to this component later and integrate additional RAM cards in their corresponding slots.

Be it as it may, you still need at the very least 8 gigabytes to start with.

Another thing that you should concern yourself regarding RAM is how many upgrade slots your laptop has. Every manufacturer indicates whether the top limit is 32 or 64 (although certain units might go a bit below or above).

Essentially, music production programs, VSTs, and plugins all require a certain amount of storage space, but so do your tracks.

The more you mix them and process them, the ‘heavier’ they get. That’s why you’ll need to be well-prepared with enough room for everything.

The difference in price between different hard disks isn’t that great, so ‘bigger is better’ in this sense.

However, you should also consider the ‘speed’ of your HDD.

‘Faster’ HDDs are the ones that reduce the load times and thus are fairly more expensive.

If you didn’t spend all your money on RAM and CPU so far, you should also consider buying a Solid-state-drive (SSD). SSDs are incomparably faster than HDDs, and to top it all, they reduce the load times for your system and other programs as well.

You shouldn’t concern yourself too much about which operating system your laptop is supplied with; you can easily uninstall it and upgrade to the OS of your preference at a later point.

However, it’s certainly convenient to have a pre-installed OS on your laptop, which will enable you to start working right away.

The only thing that’s worth mentioning in this regard is whether you should go with a 32 bit or a 64 bit OS.

‘Is desktop PC better suited for music production than a laptop’ is a fair question, but also the one that can’t be answered quite easily.

Basically, a well-equipped laptop is just as great as a well-equipped desktop PC, but there are just a couple of things that set them apart strictly speaking from the standpoint of performance.

First and foremost, laptops are far superior in terms of mobility. Being stuck to your computer chair limits quite a few things, whereas you can always simply take your laptop anywhere you want; this is especially important for tasks that are meant to happen outside of your studio – collaborating with different musicians, recording vocals, and so on.

On another hand, laptops are inferior to desktop PCs in several ways. Primarily, most laptops pack non-upgradeable feature or a limitation of sorts in that regard.

For example, a good bunch of laptops supports up to 64 gigabytes of RAM. Even though this is a satisfactory amount of memory, the fact that you can’t improve it is a bit of a pitfall.

Additionally, certain programs (especially system software) sometimes perform in a very clunky way when installed on laptops, whereas most of the time they’ll run smoothly on a PC.

Last, but not least, if you have a low budget after spending most of your money on quality guitars, basses, percussion, and such, you should note that piecing together a PC is usually cheaper than buying a laptop with similar specs.

At the end of the day, you’ll need a decently strong and fairly expensive laptop if you want to start producing music professionally.

Luckily, you won’t need to spend a fortune, but knowing in which segments you need to invest more certainly goes a long way.

We hope that we’ve helped you decide which specs to focus on the most, and which are forgiving if cheap.