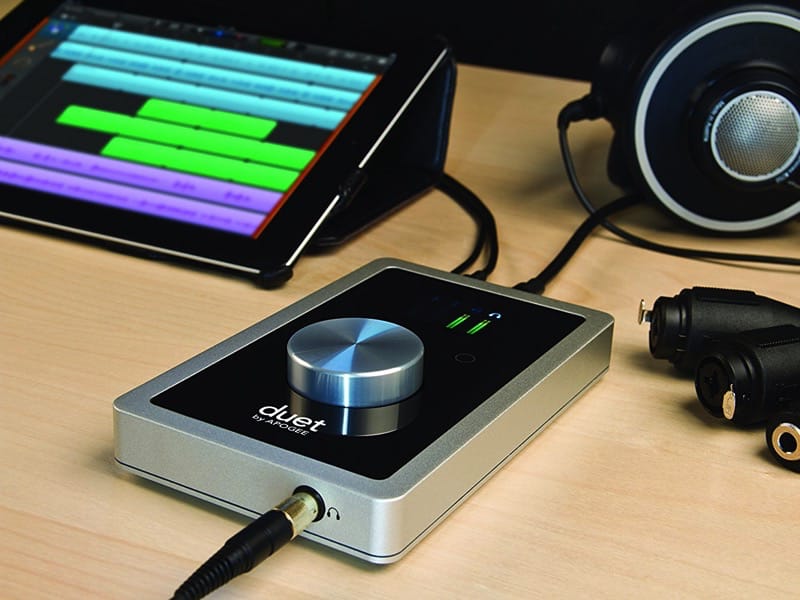 The Best iOS Audio Interfaces – An Overview and Comparison

With iPads and iPhones getting better and more capable of supporting various DAWs, no wonder so many people decide not only to record but mix and master on these portable devices.

But, in order to get the most out of your tablet, you need a good audio interface. While there are many to choose from, some just perform better than others.

Let’s take a look at the best iOS audio interfaces you can get today.

Focusrite has already proven that they know their business so far, with many amazing audio interfaces. But how does their iTrack Solo perform?

In terms of build quality, this interface feels quite premium. The aluminum unibody case isn’t just sturdy but will look nice on your desk as well.

There are 2 inputs on the front. An XLR for the mic, with its respective gain knob, and one for the instrument with a gain knob as well. Apart from that, the front stays pretty simple. Just a big monitor volume knob, a headphone output, and a direct monitor switch.

A neat feature Focusrite included are the LED halos around the gain knobs. The color of these halos tells you if the signal is clipping, and whether the levels are too high.

The back sports USB 2.0 and Device link connectors alongside stereo line outputs.

If you need a simple yet effective audio interface to use with your iPad, the Focusrite iTrack Solo is a great option, especially when considering it costs around $100.

If you have any experience with music and instruments, Roland should be a familiar name by now. Their Duo- Capture EX is their take on mobile audio interfaces.

At first glance, this interface looks very sleek, but durable as well. The build quality is on point, and will definitely make this device last you a long time.

With two combined inputs, having both XLR and standard instrument option, you are free to simultaneously record two instruments, an instrument and vocals, or with two microphones. As this feature gives you a lot more freedom, we’re not sure why this isn’t a standard when it comes to audio interfaces.

Two phantom- powered VS preamps are a great addition, especially if you use condenser microphones in your setup. The front, though relatively minimalistic, gives you a headphone output as well as sensitivity and output controls.

Besides standard stereo output, the Duo- Capture offers both MIDI input and output option as well.

For less than $200, the Roland Duo- Capture EX is a good investment, with musicians who use MIDI devices besides mics and instruments on mind.

Marketed as the first professional stereo audio interface for iPads, the Apogee Duet takes a slightly different approach than the other models we’ve mentioned so far.

While the device itself may boast a smaller form factor, it can certainly take up numerous different input sources.

The whole idea is to have a single input to which you can connect a cable that offers multiple connectors. It supports standard instrument cable jacks as well as XLR for connecting microphones.

The interface on the device is made up of an OLED screen which delivers visual feedback of the levels of the instruments you’re recording. All of the controls are combined in a single multi- function knob on the top, so in order to adjust different parameters, you simply tap a button to cycle through them and turn the knob to set the level.

If you don’t mind the adapter cable setup and the around $600 price tag, definitely consider the Apogee Duet.

Switching things up from a relatively expensive option to a very budget- friendly one, the Tascam iXZ is an awesome alternative for connecting your instruments to your iPad, and for less than $50.

When designing the iXZ, Tascam wanted to save as much space as possible. The result was the interface being very slim, with only the input fraction of the device having a slight bulge.

Other than that, the iXZ does feel kind of cheap. But hey, it doesn’t have to look good in order to perform good, right?

A simple switch allows you to toggle between the instrument and XLR input, and a similar switch turns the phantom power on and off. The volume wheel is the same kind you would find on the old cd and cassette tape players.

Performance- wise, it was surprisingly good. The outside looks definitely don’t reflect the audio quality.

So, if you’re looking for a pocket- sized audio interface with a low price and slightly above average performance, the iXZ by Tascam is the way to go.

Don’t just buy an audio interface to connect your iPad to it. Make your iPad a mini mobile studio with the iO Dock II by Alesis!

The rather unique design which makes the iO Dock II essentially a sleeve over your iPad not only makes your desk more organized but also keeps everything in your reach at all times.

Both the stereo speaker outputs and the 2 combined XLR/ instrument inputs are placed on the upper side of the device. Guitar/ mic line toggles are featured as well as a phantom power switch.

You can even use a footswitch with this interface, gaining even more control.

The sides utilize output level controls, as well as MIDI in and out. Cable management and general I/O design are done in a very ergonomic way.

With a price ranging from $250 to $300, the iO Dock II by Alesis features a great value for the money.

As there are fairly different options you could go for, now it’s up to you to see which one of the mentioned audio interfaces works best for your needs.

We hope that you found this overview of the best iOS audio interfaces helpful. Thank you very much for reading!