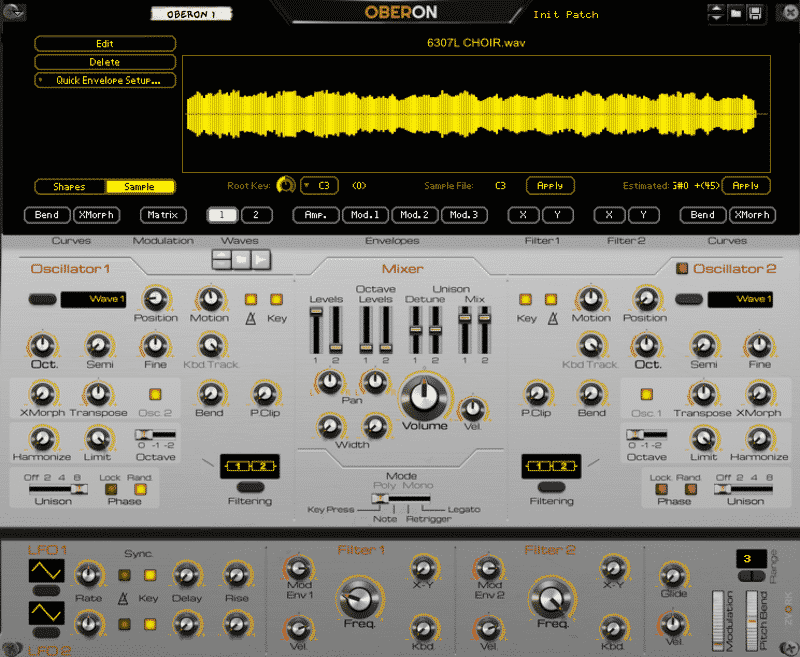 Zvork – Rack Extension for Propellerhead Reason developer has released Oberon 2 – second version of his powerful synth. The unique features of Oberon are flexible screens where you can draw waveforms, envelope curves etc.

With the recent update of Reason 9.2 and their SDK – Rack Extension developers were able to import samples. And the major feature of a new update is abiltity to import samples (to replace oscillators waveform). With Position and Motion control you can get truly unique granular/timestretched effects – try loading there various samples – strings, synth lines, 808 kick or a drum loop. The combination of a powerful synth with Reason 9.2 sample import feature opens a truly new world for sound designers and brings new life to a Oberon synth by Zvork.

The Oberon synthesizer has two oscillator sections and two filters. Each oscillator can be fed to one of the two filters or to both, in serial or parallel mode. These filters enable you to alter the timbre of your sound but are not the only mean to do so. Each oscillator can generate a number of different waves, from simple sawtooth and square to more complex metallic or robotic sounds. Each of these waves is in reality a wave sequence that can be played at different speeds.

This major update adds new features such as sample loading, wave modifiers, LFO rise and delay parameters, but also GUI enhancements and 100+ new patches. Please note that this update is only available for Reason 9.2+ owners.